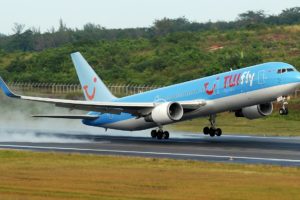 TUI aircraft Boeing 767-300 suffered suffering right hand engine compressor stalls after takeoff from Vaasa Airport, Finland. Shortly after takeoff the crew observed problems with the engine compressor and detected flames from it. The airplane was en route to Espargos Amílcar Cabral Airport (GVAC) Kap Verde island with 328 passengers on board. Fortunately the pilot succeeded to return Finland and landed safely without any injuries among the people on board.

During the emergency landing at the runway were sent 15 rescue units, including firefighters, police officers and emergencies. Fortunately there were no injured people and no damage to the aircraft.

The people were transferred to the terminal and rebooked to another flight to Espargos Amílcar Cabral Airport (GVAC) Kap Verde.

The Boeing 767 is a mid- to large-size, mid- to long-range, wide-body twin-engine jet airliner built by Boeing Commercial Airplanes. It was Boeing’s first wide-body twinjet and its first airliner with a two-crew glass cockpit. The aircraft has two turbofan engines, a conventional tail, and, for reduced aerodynamic drag, a supercritical wing design.