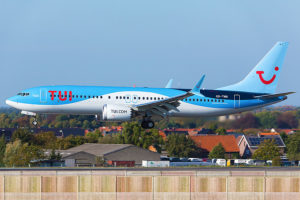 The German tour agent TUI may lose up to 300 million EUR as a result of Boeing 737 MAX grounding. In March, the world’s largest travel concern announced that it was refusing to use the Boeing 737 MAX8 in all directions. The concern will not claim compensation from Boeing in connection with the suspension of flights for the Boeing 737 MAX8.

“So far, neither the date of modification of the existing model of the aircraft by the manufacturer, nor the dates of approval of such modifications by the Federal Aviation Administration of the United States and the European Aviation Safety Agency, have been announced”, says the press release of TUI.

It is noted that on the background of coming Easter and summer holidays, the tour operator has taken measures to ensure that customers can use the services of the company. TUI started using its own aircraft fleet, extended the lease of aircraft that had to be replaced by Boeing 737 MAX aircraft, and leased additional aircraft.

Earlier, a spokesman of TUI Group said that the contracts for the supply of 72 Boeing aircraft will be executed.

On the morning of March 10, an Ethiopian Airlines Boeing 737 MAX8 plane carrying 157 people crashed. This was the second accident with aircraft of this model for five months. After the crash, a number of countries and airlines suspended flights of the Boeing 737 MAX8. It was followed by a worldwide grounding of the airplanes Boeing 737 MAX, which are suspended to carry flights with passengers.