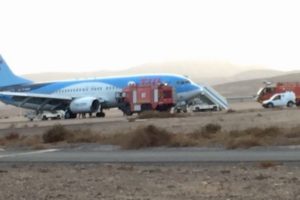 TUIfly aircraft Boeing 737-800 aborted takeoff at Fuerteventura Airport on Canary Islands due to ruptured tires. The airplane was accelerating through the runway 01 when the pilot aborted the takeoff roll and stopped on the runway. It was found that both tires on the left hand main landing gear had ruptured and the aircraft was rolling on the rims. Fortunately the crew succeeded to keep control of the airplane and were prevented more serious accident. All the passengers were disembarked at the runway through the airstairs and transported by busses back to the terminal.

The local authorities initiated investigation for the root cause of the accident. The aircraft did not suffered damages, but will be inspected before return in service.

The passengers of TUIfly were rebooked for another replacement aircraft and arrived at Hannover Airport with delay.

Boeing 737-800 is a short- to medium-range twinjet narrow-body airliner, allowing operators to fly increased payload to and from airports with runways under 5,000 feet (1,500 m).