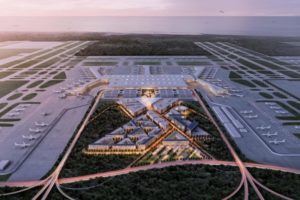 One of the most impressive is infrastructure projects in Turkey is the construction of the new Istanbul airport. With a total area of 8 million sq m, when completed, it will be the largest in the world. Even after the first stage of construction, the airport will be able to serve more than 110 airplanes simultaneously and will employ directly and indirectly up to 225,000 people.

The design of the airport is made by Pininfarina. The building of the megaproject started in May 2015 and its first phase is due to be completed in October 2018. About 80% of the planned work is already ready, while test landings and take-offs are scheduled for next months and the official opening for October 29th.

The airport and its adjacent infrastructure are being built simultaneously on 3 different construction sites with over 800 machines and 2200 trucks. The building of the project employs a total of 31 000 people.

The investment is about 10.2 billion USD, and is expected to generate 22.2 billion USD in the 25-year concession. The airport will serve 350 destinations around the world.

The airport is so huge that it is built in several stages and its facilities will expand further over time. The project must be finalized by 2030.
Then airport will have 4 terminals with a railway line between them, 6 runways, platforms for 500 aircraft with a total area of ​​6.5 million sq m, outdoor and indoor parking with a capacity of 70,000 cars.

There will be many service buildings and facilities such as aviation center, rescue and fire stations, hotels, prayer halls, congress centers, power stations, wastewater treatment plants and waste treatment facilities.

Already this year the airport will be able to accommodate 90 million passengers annually, and by the end of the project, its capacity will be increased to a colossal 200 million people. The main reason for its construction is the congestion of the other 2 Istanbul airports – Ataturk and Sabiha Gokcen. Annually, traffic through both airports is growing at a double-digit pace, and in 2017 they have served more than 95 million passengers.

The new airport will replace and retire Ataturk International Airport, which is among the five busiest airports in Europe. It will take also its aviation code.