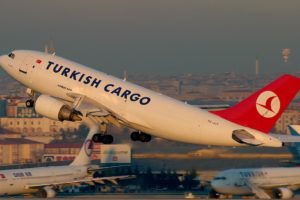 Turkey sent to Qatar 200 cargo planes with various essential goods worth more than 20 million USD, as the Middle east country is in isolation since the beginning of June because of a diplomatic crisis with its neighboring countries. Turkey supports Qatar and consider that it is not a terrorist state.

“Turkey does not help (Qatar), but exports goods for which payment has already been made. We made perhaps the world’s largest operation for the delivery of goods – on 200 cargo planes”, said the Turkish Economy Minister, Nihat Zeybekci. “The value of the products delivered to Qatar is more than 20 million USD”, added he.

According to the local residents the political tension is not felt in Qatar and did not caused significant problem for the local consumers. Many European countries, as well as Turkey and India, supported Qatar and used the situation to open new trade relations and make urgent deliveries to the Middle East country.

Saudi Arabia, the United Arab Emirates, Bahrain and Egypt in early June broke off diplomatic relations with Doha and stopped all communication with Qatar, accusing it of supporting terrorism and interfering in their internal affairs. A number of other states joined the decision later. Kuwait acted as an intermediary in resolving the conflict. Later, the Arab countries presented an ultimatum to Qatar, urging it to agree within 10 days to meet the requirements of the neighbors.

The ultimatum contains 13 demands, including a reduction in the level of diplomatic and military relations with Iran, the closure of the Turkish military base in the country, the termination of financing of terrorist organizations, the refusal to interfere in the internal affairs of the Arab countries, the support of opposition figures, and the closure of the entire satellite television network Al-Jazeera.

Qatar rejected the accusations of Arab neighbors and said that the demands put forward are unrealistic and can not be fulfilled, violating its sovereignty.