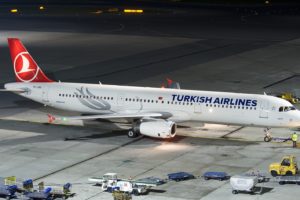 Turkish Airlines plane Airbus A321neo landed by an emergency at Sofia Airpot in Bulgaria due to a technical malfunction. The aircraft was performing flight TK1944 from Brussels to Istanbul, but the pilot reported about a technical problem and asked to divert the plane to Sofia, where landed safely. Fortunately, during the emergency landing, there were no injured people, but emergency teams were on site. The aircraft is still on the ground for inspection. It is unclear how the passengers will be transported to Istanbul.

The cause of the landing is a technical problem, but the exact reason is still under investigation.

The operations of Sofia Airport have been suspended during the emergency landing, but later were resumed. There are no significant delays in flights at the airport.

Airbus A321 is a member of the Airbus A320 family of short- to medium-range, narrow-body, commercial passenger twin-engine jet airliners manufactured by Airbus. The A321neo will be part of the Airbus A320neo family of airliners developed since December 2010. In addition to the new engines, the modernisation programme also included such improvements as: aerodynamic refinements, large curved winglets (sharklets), weight savings, a new aircraft cabin with larger hand luggage spaces, and an improved air purification system. Customers will have a choice of either the CFM International LEAP-1A or the Pratt & Whitney PW1100G engines.