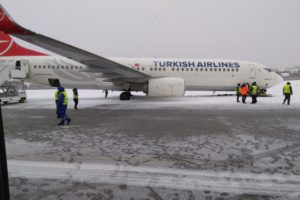 Turkish Airlines plane Boeing 737-800, performing flight TK442 from Istanbul to Lviv in Ukraine, partially ran off the runway at Lviv Airport during landing. Fortunately, there were no reported injuries among the 59 passengers and 6 crew members on board. When the incident occurred, heavy snowfall and ice were reported around Lviv Airport. After skidding off the taxiway, the airplane was stuck on the ground.

All the passengers disembarked via mobile stairs at the runway and were taken to the terminal by busses. The aircraft sustained minor if any damage.

The operations of the airport were suspended for about 4 hours until the aircraft was towed to the apron.

Turkish Airlines officials have not made any statement about the incident in Lviv.