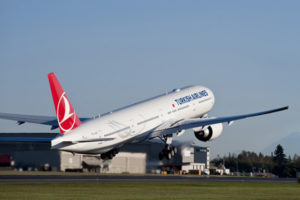 Turkish Airlines Boeing 777 plane made an emergency landing in Dublin, because of a passenger who felt unwell. The liner flew on Monday from the American city of Houston to Istanbul with 78 passengers. During the passage of the Atlantic, one of the people became ill and did not felt well. The crew of the Boeing 777 decided to make an emergency landing in the Irish capital Dublin, where the medical crew boarded the plane and helped the ill passenger.

The Turkish Airlines Boeing 777 laded in Dublin at 11:55 local time and departed about half an hour later. The aircraft arrived successfully in Turkey with 30 minutes delay.

The accident was reported, but no additional details and circumstances were released.

Boeing 777 is a family of long-range wide-body twin-engine jet airliners. It is the world’s largest twinjet and has a typical seating capacity of 314 to 396 passengers, with a range of 15,844 km.