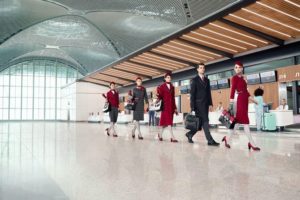 Within the framework of celebration of 85th anniversary of Turkish Airlines, the company introduced a new uniform specially created for the cabin crew. The use of the uniform will begin simultaneously with the launch of a new airport in Istanbul, which will become a “new home” for the national air carrier of Turkey.

Inspired by many classical elements of Turkish design and culture, the style of the new uniform combines traditional ornaments used in glass and ceramic handicrafts and calligraphy, as well as modern textures and details. The collection uses the shapes and colors associated with the Bosporus strait, and a new geometric ornament depicting a flow specially created to symbolize the laid-back and active energy that pervades the most dynamic city of Turkey – the junction of the East and the West.

Turkish Airlines has chosen Milanese couturier Ettore Bilotta to create a new dynamic design for the uniform, which marks a new era and a new image of the brand of the national carrier of Turkey.

A unique and well-recognized collection in a dark red and anthracite-gray palette includes hats, gloves, dresses, suits, bags and accessories. Another key aspect of the project is that the cabin crew design, pilots, chefs on-board and ground service workers will be brought to the same style to provide the passengers with a holistic perception of the brand. Models created by Bilotta combine form and function, which is an important condition for an airline flying to the largest number of international destinations in the world. The new design is not only developed with the support of the leaders of the fashion industry and cabin crew of Turkish Airlines, but also thoroughly tested on long-term flights in different climatic conditions.