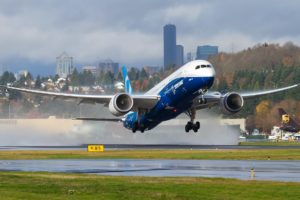 Turkish Airlines has signed a preliminary agreement with Boeing Corporation for the purchase of 40 wide-body passenger airplanes Boeing 787-9 Dreamliner. The contract is estimated at 10.8 billion USD. The agreement was signed by the chairman of the board of directors of Turkish Airlines Ilker Ayci and the vice-chairman of the American corporation Boeing Roy Conner in New York. The signing ceremony was also attended by Turkish President Tayyip Erdogan.

“The Boeing 787 Dreamliner is the most technologically advanced aircraft in the world. We need wide-body aircraft for the third Istanbul airport, and we also want to strengthen our fleet of aircraft for the 100th anniversary of the Republic of Turkey”, said Ilker Ayci.

Turkish Airlines is one of the largest air carriers in the world, which operates flights on 302 routes – 250 of them international. The company’s fleet consists of 335 aircraft.