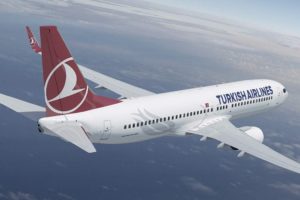 “The overall load indicator increased significantly (by 5.4 percentage points) and reached 79.5%, taking into account the 9% increase in the available chair-kilometers, in while the indicator of the level of loading of international flights increased by 5.6 percentage points to 78.6% (compared to 74.3% in November 2016). The double-digit growth in demand (revenue per kilometer), which began in July 2017, continued. In November 2017 this indicator increased by 17.1%”, says the official statement of Turkish Airlines.

In November 2017, the volume of transported goods and mail increased by 26.9% compared to November 2016. The most significant growth of this indicator was demonstrated by Europe (an increase of 33.8%) and the Far East (an increase of 31.8%). As a result of November 2017, the level of loading increased in all regions of the airline’s presence. North America, the Middle East, the Far East and Africa showed a particularly impressive growth compared to other regions.

“During the period from January to November 2017, the demand and total number of passengers carried increased by 7.2% and 8.3% respectively, compared to the same period last year. The airline reached 63.1 million people”, adds the statement of the airline.

The volume of transportation of goods and mail increased by 26.3% and reached 1 million tons, due to the steady growth of this indicator throughout the period from January to November 2017.