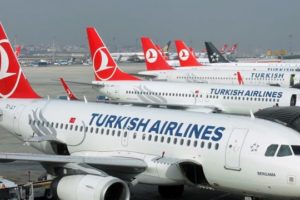 “We will not fly for April, only fly by the end of March. The last flight is March 23 from Novosibirsk, and return from Istanbul on March 22”, said the call center of the airline. “It’s definitely not for the summer season”, adds the operator to customers.

The news come just a day after the Turkish carrier announced that in late March will close the flight from Istanbul to Astrakhan.

Thus, the airline in the summer season will fly to 9 destinations in Russia – Moscow, St Petersburg, Sochi, Yekaterinburg, Stavropol, Rostov on Don, Ufa and Kazan. Since April 4, the carrier will start flights from Istanbul to Voronezh.

Turkish Airlines is now the leader in the number of destinations in Russia among foreign carriers. The second place in this indicator is taken by the low-cost flydubai, which flies from Dubai to seven cities – Moscow, Ekaterinburg, Samara, Kazan, Mineralnye Vody, Rostov on Don and Krasnodar. Earlier flydubai also performed flights to Nizhny Novgorod, Novosibirsk and Ufa.