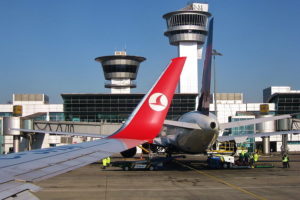 Turkish airports served 210 million passengers in 2018, which is 8.8% more than in the previous year. According to the data of the Turkish State Airport Management, the number of foreign travelers increased by 16.4% last year to 97.2 million people.

The number of passengers who are citizens of Turkey increased by 3% YoY to 113 million people.

Istanbul Ataturk Airport, the main airport of Turkey, received 68 million passengers in 2018, 6% more than a year earlier. At the same time, the number of foreigners increased by 10%.

Passenger traffic at Sabiha Gokcen International Airport, also located in Istanbul, increased by 9% over the year.

Meanwhile, the new Istanbul airport, which started work at the end of October, served almost 100,000 passengers in less than three months. However, the transfer of all domestic and international flights from Istanbul Ataturk Airport to the new airport, located in the north-west of the city, was postponed from January 2019 to March 2019.

According to the plans of the Turkish government, the new airport, which is called Istanbul, should become one of the largest air hubs in the world. At the initial stage, passenger traffic should reach about 90 million people per year, and within ten years will increase to 150 million.

Thanks to the continued high tourist activity, the passenger traffic at Antalya Airport jumped by 22% to 31.6 million people in 2018. The number of foreign tourists increased by 30% to 24 million people.