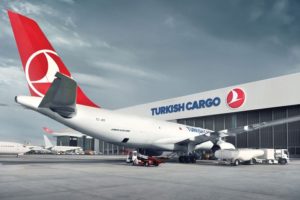 Turkish Cargo, a subsidiary of Turkish Airlines, received the Payload Asia award in the category “Cargo Airline of the Year”.

“Having demonstrated the impressive growth of all production indicators, Turkish Cargo has once again received recognition of the world market of air cargo transportation. From January to September 2017 the volume of freight and mail transportation of the company increased by 27%, reaching 810,000 tons, while the most positive dynamics was observed in September 2017”, said the official statement of the airline.

Turkish Cargo Airlines was named the “Cargo Airline of the Year” in the prestigious “Choice of Client” nomination as part of the 33rd annual Payload Asia Awards organized by Payload Asia Group. These awards are awarded for the high achievements in the field of air cargo services based on the results of a survey of readers, customers, and business partners of Payload Asia, part of the Asia-Pacific Freight Forwarders Federation (FAPAA).