Turkey announced Thursday that its troops were advancing before Kurdish fighters in northern Syria, launching air and artillery attacks against designated targets along the border.

The Turkish invasion, which began Wednesday with bombardments and artillery rounds after the withdrawal of US troops from the area, has been widely condemned by the international community.

Turkey says it wants to create a “security zone” for the return of millions of refugees to Syria.

However, world powers fear that the action will deepen the conflict and that many prisoners of the Islamic State group escape from prisons amidst the chaos.

Kurdish leadership authority in northern Syria, Democratic Forces of Syria, SDS, said a prison that was hit by Turkish shells retains “the most dangerous criminals of more than 60 nationalities.”

Turkey had long been threatening to attack Kurdish fighters, whom Ankara considers allied terrorists with a Kurdish insurgency in Turkey. 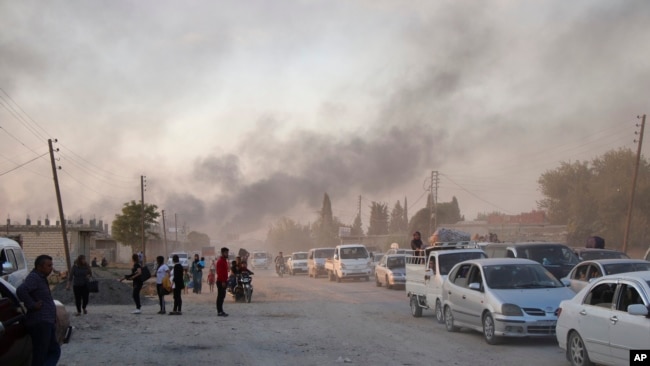 The Turkish Ministry of Defense statement said the military impacted 181 Kurdish militia targets with its air force and artillery since the operation began.

However, the Syrian Democratic Forces and Syrian activists claimed that Turkish troops had not made much progress on several open fronts in recent hours, but it was not possible to verify their claims independently, and it was difficult to assess the situation on the ground.

“There is no progress for now,” tweeted Mustafa Bali, spokesman for the SDS.

The Syrian Observatory for Human Rights, which monitors the war through a network of activists across the country, reported that Turkish troops attempted to advance on several fronts sheltered by air strikes and artillery rounds, but made no tangible progress.

The Observatory added that seven civilians have died since the start of the Turkish offensive.

The expectations of an invasion grew after the sudden decision of the president of the United States, Donald Trump, to basically abandon the Kurdish fighters, leaving them vulnerable to an attack.

The Kurds, who were the only US allies in Syria in the fight against the Islamic State, halted all operations against extremists on Thursday to deal with Turkish troops, Kurdish and US officials said.

Newer PostThey Denounce Alleged Incursion of American Aircraft in Venezuela
Older PostWhat is the “Hot Jupiter”, the Most Violent Exoplanets in the Universe