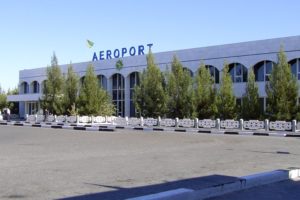 The new international airport in the city of Turkmenabat opened. The city is located in the north-east of Turkmenistan and will be home for Turkmen Airlines.

At the opening ceremony of the airport, the leadership of Turkmen Airlines was presented with the certificate of the Munich International Airport, confirming the high appreciation of the functionality of all systems of the new airport. The airport was built 13 km from Turkmenabat (the administrative center of Lebap region) in close proximity to the Ashgabat-Turkmenabat highway and the Ashgabat-Kerki railway.

The capacity of the air terminal complex is 500 passengers per hour. The runway is 3,800 m long and 65 m wide, being equipped with modern light-signal and meteorological systems, a landing system for the second category of ICAO, which allows servicing aircraft of all types. The cargo terminal of the airport is designed for processing 200,000 tons per year. The passenger terminal has four telescopic gangways. In terms of functionality, the passenger terminal, like the entire Turkmenabat airport complex, meets all the international standards.

Meanwhile, in February 2013, local media reported that the country’s president had signed a decree ordering the state-owned national company Turkmen Airlines to sign a contract with Road Construction Altcom (Ukraine) for the design and construction of a new international airport in Turkmenabat designed for service of 500 passengers per hour. The document prescribed to start construction work in February 2013 and to hand over the object with full readiness for operation and improvement of the adjoining ones rhetorician in February 2016.

This is the third airport of the international class, built within the framework of the “National Civil Aviation Development Program of Turkmenistan for 2012-2030”. In September 2016, a new international airport was opened in Ashgabat with a capacity of 1,600 passengers per hour. The cargo complex of the airport is capable to process 200,000 tons per year. The airport can accept airplanes of any type and carrying capacity. A new runway with a length of 3,800 m was built and an active runway with a length of 3,800 m has been reconstructed.