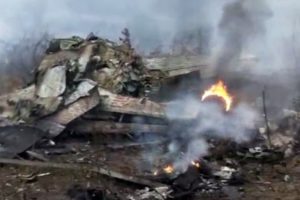 Twelve people died after Chinese military aircraft crashed near Zhengchang in Guizhou Province. Little information was released by Chinese defense officials. While the aircraft type was not disclosed, but the accident occurred last Monday during a training flight. According to the local media and video footage, the aircraft is modification of Shaanxi Y-8GX-3.

“On board were 12 people – men and women. None of them could escape when the plane began to fall”, said some of the witnesses. He explained that this aircraft is not equipped with a bailout system, and the crew did not have enough time to jump out with a parachute.

The Ministry of Defense of the PRC does not give official comments on the causes of the tragedy. Chinese sources suggest that there were 5 crew members and 7 military personnel on the flight. There were no survivors.

“A plane from the air force crashed during a domestic flying exercise in Guizhou. The authorities are putting full effort into the rescue operation”, said the air force in a brief online statement.

According to sources, both aircraft of these types are not yet perfect and need further tests and refinement before they can fully participate in military exercises.

Video from the Chinese media: