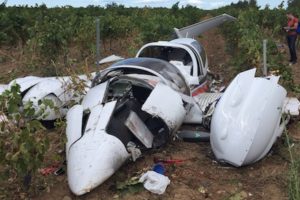 Twin engine aircraft Diamond DA42 crashed near Ghisonaccia airfield at Corsica, causing death of all four people on board. The took off from Cannes en route to to Ghisonaccia airport, but when approaching the airport’s runway started losing height and was caught by wind gust, which crashed it in the vineyards near the residence of the mayor of Ghisonaccia. The fire erupted after crashing. Nearby citizens reported to accident to local authorities and at the scene were sent rescuers and firefighters.

“The victims have been extracted from the plane and the police is also on site”, said fireman from the brigade, which arrived first at the scene of the accident.

The four people on board of the aircraft were already dead when rescuers arrived at the scene.

Diamond DA42 Twin Star is a four seat, twin engine, propeller-driven airplane developed manufactured by Austrian company Diamond Aircraft Industries. It holds the distinction of being Diamond’s first twin engine design, as well as the first new European twin-engine aircraft in its category to be developed in over 25 years.