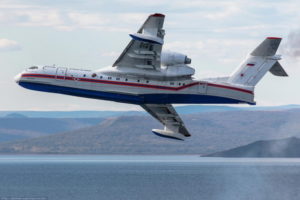 Two Be-200 multipurpose aircraft of the Ministry of Emergency Situations of Russia have completed the search for the missing commercial vessel Vostok, which disappeared in the Sea of ​​Japan. The two rescue aircraft returned to the base without finding traces from the vessel.

“Both aircraft returned to the base. The last landed at 17:23 local time. The question of continuing the search for tomorrow will be decided”, said the press service of the Ministry of Emergency Situations of Russia. They added that, despite the good weather, it was not possible to find traces of the vessel or the team of the commercial vessel Vostok.

In the search area the weather is relatively calm. The height of the wave is no more than 1-2 meters, the wind is moderate to strong, about 8-13 meters, slow icing of ships is observed, but by the end of the week the weather will gradually deteriorate to storm.

Beriev Be-200 Altair is a multipurpose amphibious aircraft designed by the Beriev Aircraft Company and manufactured by Irkut. Marketed as being designed for fire fighting, search and rescue, maritime patrol, cargo, and passenger transportation, it has a capacity of 12 tonnes (12,000 litres, 3,170 US gallons) of water, or up to 72 passengers.