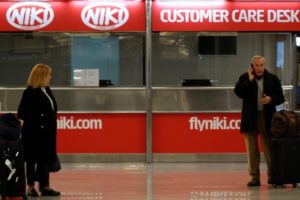 The administrator of the bankrupt Austrian airline Niki have selected two strategic bidders to take part in the final calls for its assets. The IAG, the owner of British Airways and the low-cost carrier Vueling, is one of the selected companies.

Niki, which was founded by former Formula 1 world champion Nicki Lauda, ​​was part of the bankrupted Air Berlin. The airline filed bankruptcy documents after German Lufthansa gave up a deal to buy its assets, forcing its aircrafts and thousands of passengers to remain on the ground.

Six countries have submitted a bid by the deadline of Thursday, five of which are binding, Niki administrator said in a statement without providing further information.

The founder Niki Lauda said he had offered to buy Niki. His spokeswoman, however, said on Friday he could not confirm whether he was among the two remaining candidates for the company.

A German newspapers claims that Thomas Cook and the Tuifly Airlines, owned by the TUI, are among the other bidders.