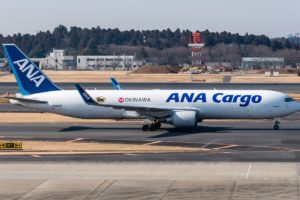 Two cargo planes were damaged in ground contact on Tokyo/Narita International Airport in Japan. All Nippon Airlines (ANA) plane Boeing 767-316F pushed back when its tail crashed into standing FedEx McDonnell Douglas MD-11F on the taxiway W. The both aircraft were damaged and taken out of service, which resulted in the cancelation of both flights.

All Nippon Airlines (ANA) plane Boeing 767-316F sustained substantial damage on the vertical stabilizer and the tail cone, while FedEx McDonnell Douglas MD-11F received damage on the No 2.

Fortunately, none of the crew or ground personnel were injured during the accident.

The investigation is underway. According to the preliminary information, an airport person, who instructed the ANA plane Boeing 767-316F in the tarmac did not acknowledge the presence of the FedEx McDonnell Douglas MD-11F and issued permission of the Japanese aircraft to go back.

As the accident happened on the taxiway, there was no impact on the Tokyo/Narita International Airport operations.

Boeing 767 is mid- to large-size, mid- to long-range, wide-body twin-engine jet airliner built by Boeing Commercial Airplanes. It was Boeing’s first wide-body twinjet and its first airliner with a two-crew glass cockpit. The aircraft has two turbofan engines, a conventional tail, and, for reduced aerodynamic drag, a supercritical wing design.

McDonnell Douglas MD-11 is an American three-engine medium- to a long-haul wide-body jet airliner, manufactured by McDonnell Douglas and, later, by Boeing Commercial Airplanes. Based on the DC-10, it features a stretched fuselage, increased wingspan with winglets, refined airfoils on the wing and smaller tailplane, new engines and increased use of composite materials