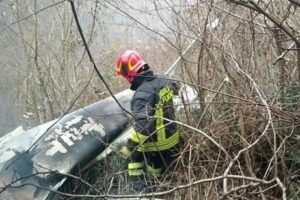 Light single-engine aircraft Cessna F150L crashed under unknown circumstances near Arbizzano, Italy. The aircraft with flight instructor and a student crashed in a small wood in the Novare Estate, killing both. Fire erupted after the air crash, which was later extinguished by the local fire brigade. At the scene arrived firefighters and rescuers, as well as medical teams and local police officers. Unfortunately there were not able to save the people, who were found dead.

A witness of the accident heard an explosion in flight and saw the plane fall into a wooded area. The local authorities initiated investigation for the root cause of the accident.

The victims are two Veronese, a flight instructor and the student who had to renew the license.

The Cessna 150 is a two-seat tricycle gear general aviation airplane that was designed for flight training, touring and personal use. The Cessna 150 is the fifth most produced civilian plane ever, with 23,839 aircraft produced.The airplane was offered for sale in the 150 basic model, Commuter, Commuter II, Patroller and the aerobatic Aerobat.