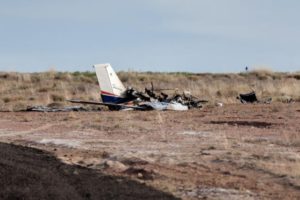 Light sport aircraft Tecnam P2002 Sierra impacted the terrain at Santa Fe Municipal Airport during practicing touch-and-go landings. The two people on board died in the crash and the post-impact fire. The crash took place about 500 feet from the departure end of the runway of Santa Fe Municipal Airport in New Mexico, USA. Circumstances around the crash are unclear, as the weather in the vicinity was good, as well as the visibility.

The State Police initially had reported that the pilot was the only person on board, but later it was estimated that there were two people on board, both of whom were reported dead after the crash.

The Federal Aviation Administration is investigating the aircraft crash.

Tecnam P2002 Sierra is a two-seat, low-wing, light aircraft built by Tecnam, constructed from aluminum and powered by a single 100 hp (75 kW) Rotax 912 S2 engine. The aircraft features a sliding canopy which can be opened in flight.