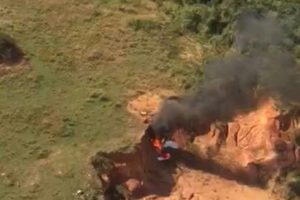 Two people died in the fall of an ultralight aircraft Tecnam P2004 Bravo in Santa Cruz, west of Rio de Janeiro, Brazil. The accident occurred at a location near the neighborhood’s sporting club.

After the fall of the aircraft it was engulfed in flames. The people on board were rescued alive, but later died from the wounds. There is still no information on the identity of the dead people.

Firefighters from the Santa Cruz arrived at the scene of the accident and succeeded to extinguish the flames.

Newer PostAeroflot Group increased passenger transportation by 11.4% in June
Older PostAirbus sold a total of 431 aircraft during the international air show in Farnborough