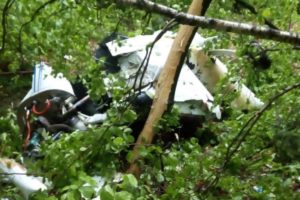 A small single-engine aircraft Tecnam P2008JC collapsed in a mountainous area in Buzau, Romania, between Nehoiazu and Buzau Valley. The aircraft took off from Ghimbav at 14:30 (local time) en route to Constanta with 2 people on board, but during the flight went missing. The accident was reported by local residents who heard airplane noise during the crash. The circumstances around the crash were unclear. At the scene of the accident were sent firefighters, medical crews, gendarmes, and police officers were alerted to search-rescue actions. The area was hard to reach and emergency services arrived several hours after the reported crash.

It was estimated that during the accident there were two people on board, both found dead at the wreckage.

Tecnam P2008 is a single-engine, high-wing two-seat aircraft built in Italy but aimed at the US market. It is the first Tecnam aircraft to incorporate major composite components. It was introduced at the AERO Friedrichshafen 2009 show, with first deliveries in December 2009. The aircraft has a length of 6.93 m, a wingspan of 8.80 m and a wing area of 11.50 sqm.