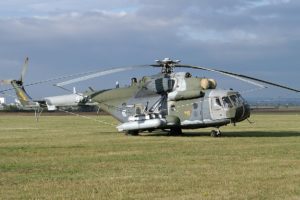 Bulgarian military helicopter Mil Mi-17 crashed near Plovdiv Airport. Two people died and another one is seriously injured. Immediate fire-fighting measures were taken by ground personnel to prevent a helicopter blast and to save crew members. At the scene of the accident arrived police officers and ambulances who gave first air of the crew on board.

Around 20.30 local time on a planned flight, helicopter Mil Mi-17 with crew people on board fell from about 50 m high due to unknown reasons.

During the medical assistance operations, two of the soldiers – the crew pilot and the assistant pilot – died. The third crew member, the flight engineer, was taken to hospital immediately.

“Everything has happened very quickly and the pilots have not been able to report, probably the accident in the machine and not the pilots’ mistake”, said the Bulgarian Minister of Defence, Krasimir Karakachanov in a phone call to local media.

All the flights to Plovdiv airport were redirected to Sofia and Bourgas.

The Mil Mi-17 is a Russian helicopter in production at two factories in Kazan and Ulan-Ude. It is known as the Mi-8M series in Russian service. It is a medium twin-turbine transport helicopter. There are also armed gunship versions.