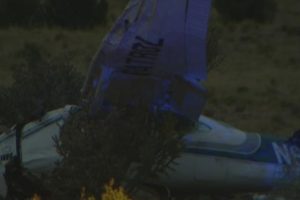 Aircraft Cessna 182 crashed near Double Eagle II Airport in Albuquerque, New Mexico. The plane crashed on the Navajo Nation land near the Canoncito Reservation, off Rio Puerco Road and Trail/Route 57. Following the accident the two people on board died and the aircraft suffered substantial damage.

The accident happened during maneuver for landing, but aircraft Cessna 182 lost engine power and impacted open field terrain. According to preliminary information of the Federal Aviation Administration, the pilot reported icing and loss of engine power shortly before crashing. The FAA says the plane was trying to land at the Double Eagle Airport, but crashed roughly 10 to 12 miles west of the airport.

New Mexico State Police says the two passengers on board, a man and a woman, died on impact. The investigation for the root cause of the accident is under way.

The damage of the aircraft Cessna 182 was substantial. Both of the plane’s wings were broken in multiple places, the plane’s metal prop was missing and much of the fuselage appeared twisted.

The Cessna 182 Skylane is an American four-seat, single-engined light airplane, built by Cessna of Wichita, Kansas. It has the option of adding two child seats, installed in the baggage area.