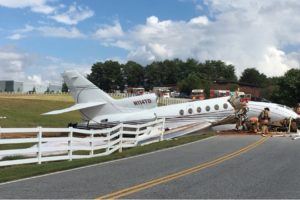 Corporate jet Dassault Falcon 50 suffered runway excursion during landing at Greenville Downtown Airport, South Carolina, USA. The aircraft overran runway 19, went down a 12 meter dropoff and crashed through a perimeter fence before coming to rest across a road. On board of the aircraft were two pilots and two passengers. One of the pilots died at the scene, and the second piloy died in the hospital. The both passengers were alive and taken to hospital in serious condition.

Representatives of Greenville Airport did not commented the versions about the probable causes of the plane crash. An investigation is under way.

The roads near the airport will be closed for some time. The fuel leak had been contained to nearby Haywood Road.

The Dassault Falcon 50 is a French super-midsized, long-range business jet, featuring a trijet layout with an S-duct air intake for the central engine. It has the same fuselage cross-section and similar capacity as the earlier twin-engined Falcon 20, but is a completely new design that is area ruled and includes a more advanced wing design.