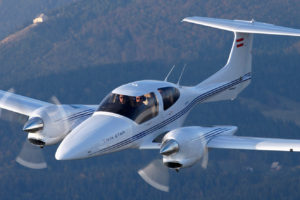 Small plane Diamond DA42 Twin Star with two people on board went missing over the central North Island in New Zealand. The aircraft was en route from Palmerston North to Taupo but lost contact with flight control with last known location near the Kaimanawa Ranges. The local authorities initiated search and rescue operations and found the aircraft wreckage on about 24 km east of Turangi. Both people on board, who were qualified flight instructors, were reported dead.

The circumstances around the crash are unknown. According to local authorities, the bad weather in the vicinity might be the main cause of the aircraft crash.

The Transport Accident Investigation Commission (TAIC) opened an investigation into the aviation accident in the Kaimanawa Ranges in the Central North Island.

Diamond DA42 Twin Star is a four-seat, low-wing, twin-engine, propeller-driven cantilever monoplane developed and manufactured by Austrian company Diamond Aircraft Industries. It is commonly used as a general aviation aircraft for touring and training purposes, equipped with a retractable tricycle landing gear arrangement and uses a T-tail. The airframe is composed of composite materials, making extensive use of carbon fiber reinforced polymers throughout its structure.