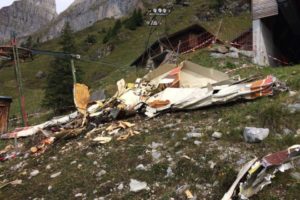 Single-engine aircraft Mooney M20K crashed near Braunwald in Switzerland. During the accident on board of the aircraft were two people from German nationalities, who died at the accident. The aircraft took-off from Donaueschingen en route to Albegna in the south of Tuscany, but at unclear circumstances at the on the mountain pickling Gumen. The pilot made an emergency call before crashing, but exact cause is not yet known. There were several witnesses, who will give their evidence to the police officers in attempt to find the root cause of the crash.

Firefighters, police and rescuers with two helicopters were deployed immediately into the crash area. The two people on board of the aircraft were already dead, when rescuers arrived.

The investigation for the accident is under way. Police officers are watching pictures and taking evidences of people in vicinity.

Mooney M20 is a family of piston-powered, propeller-driven general aviation aircraft, all featuring low wings and tricycle gear, manufactured by the Mooney International Corporation. The M20 was the 20th design from Al Mooney, and his most successful. The series has been produced in many variations over the last 60 years, from the wooden-wing M20 and M20A models of 1955, to the M20V Acclaim Ultra that debuted in 2016. Roughly 12,000 aircraft in total have been produced.