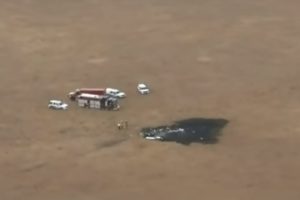 Small airplane Piper PA-34-200T Seneca II crashes in field west of Calgary in Canada, killing the two people aboard. The majority of the aircraft had burned in the post-impact fire and the two occupants onboard were fatally injured. The airplane took off from the Springbank Airport and crashed shortly after that, going down about 1.5 km south of the airport.

The falling plane was noticed by nearby residents, who reported to local authorities. At the scene were sent rescuers, paramedics and firefighters, who extinguished the flames, but found only the two adults dead in the wreckage.

“We know it had just taken off. That’s about all we know. But in terms of destination or what the intent of the flight was, we don’t know that yet”, said the representative of the Transportation Safety Board of Canada, Jon Lee.