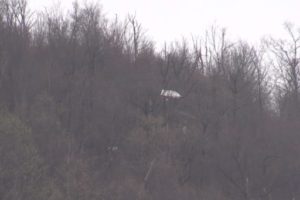 Two people died after a single-engine aircraft Cessna 172N Skyhawk crashed in Rush Township, Centre County, Pennsylvania. The plane impacted trees and terrain in Sandy Ridge Mountain during a flight from University Park Airport to Burlington International Airport in Vermont. The aircraft was completely damaged by the crash and subsequent fire, killing both occupants on board. The local authorities were informed about the accident and sent emergency and rescue teams at the site.

Emergency crews had a difficult time locating the crash, as the fog kept the state police helicopter and Bureau of Forestry’s fire planes grounded and unable to provide aerial assistance. Being in a remote and wooded area, finding access to the site was also difficult. It took about an hour until somebody was able to get on the crash site.

The two victims were pronounced dead at the scene, the coroner’s office said, and their identities are not known at this time.

The circumstances around the crash are unclear, but there was dense fog at the scene of the crash, which might cause the accident. National Transportation Safety Board (NTSB) and Federal Aviation Administration (FAA) are investigating the case.

Cessna 172 Skyhawk is an American four-seat, single-engine, high wing, fixed-wing aircraft made by the Cessna Aircraft Company. The Skyhawk N, or Skyhawk/100 as Cessna termed it, was introduced for the 1977 model year. The “100” designation indicated that it was powered by a Lycoming O-320-H2AD, 160 horsepower (119 kW) engine designed to run on 100-octane fuel, whereas all previous engines used 80/87 fuel. But this engine proved troublesome, and it was replaced by the similarly rated O-320-D2J to create the 1981 172P.