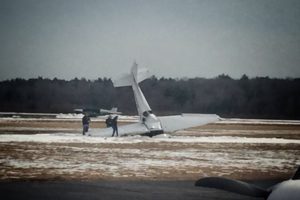 Two people died when a single-engine airplane Cessna 172S Skyhawk SP crashed at Mansfield Municipal Airport in Massachusetts. The aircraft was performing training flight and took off from Norwood Memorial Airport but impacted the turf landing area near Mansfield Municipal Airport under unknown circumstances. The emergency teams and fire brigade, which responded to the aircraft crash, found the two people on board had life-threatening injuries and both died before reaching the hospital.

The investigation for the root cause of the accident is underway. The National Transportation Safety Board is assisting Mansfield police and state police with an investigation.

According to witness evidence, the Cessna landed nose first, and the propeller was mangled. There was no fire after the crash.

According to Mansfield Deputy Police Chief Michael Ellsworth, there were no distress calls before the crash. The aircraft was preparing to land, but a radio transmission from the plane indicated a missed approach. Moments later, the Cessna 172 flew past the Municipal Airport Administration Building and crashed into the turf landing area.

“The FAA will investigate and the National Transportation Safety Board will determine the probable cause of the accident”, the FAA said in a statement.