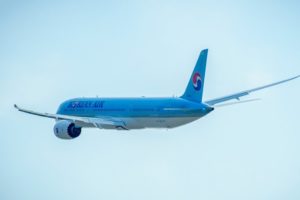 Two giant Boeing airplanes nearmissed accident at Toronto Airport in Canada. Korean Airlines Boeing 787-900 crossed the hold short line runway 05 at taxiway B, while at the time when Air Canada Rouge Boeing 767-300 was on final approach to land on the same runway. The air control instructed the landing aircraft to go around as a preventive safety measures due to runway incursion of the Korean plane. The Air Canada Rouge Boeing 767 went around and positioned for another approach and landed safely with 258 passengers and 8 crew several minutes later. There were no reports for injuries or damages.

The Korean Airlines plane took off successfully, but local authorities initiated investigation for the near miss accident.

The Korean Airlines Boeing 787-900 was taxiing for departure from Toronto (Canada) to Seoul (South Korea), while the Air Canada Rouge Boeing 767-300 was approaching to land after flight from Warsaw (Poland) to Toronto (Canada).

Fortunately there were no serious accident, but probably the nearmiss was caused by pilot mistake in taxiing.

Boeing 787-900 Dreamliner is one of the largest and most modern airplanes of Boeing. The industry-leading technology of the long-haul, mid-size widebody, twin-engine jet airliner improve the air travel experience. Its variants seat 242 to 335 passengers in typical three-class seating configurations. It is the first airliner with the use of composite materials as the primary material in the construction of its airframe. The 787 was designed to be 20% more fuel efficient than the Boeing 767, which it was intended to replace.

Newer PostBoeing forecasts the need of 1.2 million pilots and engineering personnel to 2036
Older PostSeven people died in Cessna U206 airplane crash in Mexico