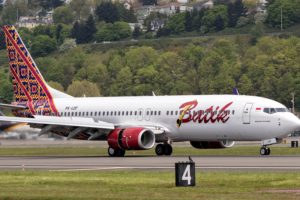 Batik Air plane Boeing 737-800 unexpectedly encountered severe turbulence during flight from Jakarta to Medan Kuala Namu in Indonesia, causing injury of a passenger and a flight attendant. The aircraft continued its flight for a safe landing at Medan Kuala Namu, where the injured people were taken by ambulance and hospitalized for medical treatment. According to the officials the two people suffered serious injuries, including fractured leg and a spine fracture. No other injuries reported among the 114 passengers and 7 crew and all other people were disembarked at the airport terminal.

According to the airline, during the accident the sky was clear of clouds and weather was good, without indication for turbulence.

The aircraft was safely inspected before allowed to return in service.

Boeing 737 is a short- to medium-range twinjet narrow-body airliner developed and manufactured by Boeing Commercial Airplanes in the United States. Originally developed as a shorter, lower-cost twin-engine airliner derived from the 707 and 727, the 737 has developed into a family of ten passenger models with capacities from 85 to 215 passengers.