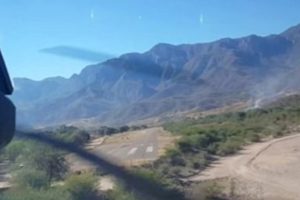 Two Mexican girls died at the airport in Chinapas while trying to make selfie on the runway. Nitzia Mendoza Corral, 18, and Clarissa Morquecho Miranda, 17, were videoing themselves on a smartphone as a light aircraft came in to land.

The girls attended horse racing, which took place near the airport. After the races, they went to the runway to take a selfie on the background of the landing plane. Both girls were struck in the head by the wing of a small aircraft and were killed. According to the pilot, he spotted the girls, but was unable to prevent the tragedy.

Some witnesses had asked the teens to get out of the vehicle because it was dangerous, but the girls reportedly ignored the warnings.

There were no reports of bad weather at the time of the accident that could have affected visibility.

The local authorities initiated an investigation of the case.