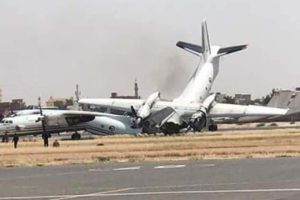 Runway 18/36 at Khartoum Airport was subsequently closed. The operations of the airport were seriously by the closure of the runway. The investigation for the root cause of the accident is under way.

The Sudanese Air Force reportedly has eight An-26 and six An-32 airplanes.

The Antonov An-32 is a twin-engined turboprop military transport aircraft. The An-32 is essentially a re-engined An-26. The high placement of the engine nacelles above the wing allowed for larger diameter propellers, which are driven by 5,100 hp rated Ivchenko AI-20 turboprop engines, providing almost twice the power of the An-26’s AI-24 powerplants.

The Antonov An-26 is a twin-engined turboprop civilian and military transport aircraft, designed and produced in the Soviet Union from 1969 to 1986. After successful operations of the An-24T tactical transport in austere locations, interest in a version with a retractable cargo ramp increased. Using the majority of the An-24 airframe, with its high-set cantilevered wings, twin turboprops and stalky main undercarriage, the An-26 included military equipment, such as tip-up paratroop canvas seats, an overhead traveling hoist, bulged observation windows and parachute static line attachment cables.

Video footage shows the Sudanese Air Force planes landing on the same runway, with one crashing into the other at speed: