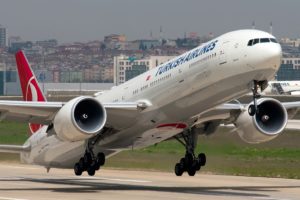 Two passenger airplanes collided at Ataturk airport during taxiing to the runway. The Scat Airlines aircraft implementing the Istanbul-Aktau flight touched with the Turkish Airlines (THY) plane Boeing 777 implementing the Istanbul-Taipei flight. The Turkish Airlines plane with 286 passengers suffered damage to the tail section. Whether any damage was caused to the Scat liner is not specified. As a result of the incident, no one was hurt, but all the evacuated passengers were sent to Taipei by another flight.

As a result, the departure of the aircraft, Turkish Airlines has been cancelled, and 286 passengers flew to Taipei on another plane.

The operations of Ataturk international airport were slightly delayed during the accident, but there were no reports for flight cancellations.

Boeing 777 is a family of long-range wide-body twin-engine jet airliners. It is the world’s largest twinjet and has a typical seating capacity of 314 to 396 passengers, with a range of 5,240 to 8,555 nautical miles. Commonly referred to as the “Triple Seven”, its distinguishing features include the largest-diameter turbofan engines of any aircraft, six wheels on each main landing gear, fully circular fuselage cross-section, and a blade-shaped tail cone. Developed in consultation with eight major airlines, the 777 was designed to replace older wide-body airliners and bridge the capacity difference between Boeing’s 767 and 747.