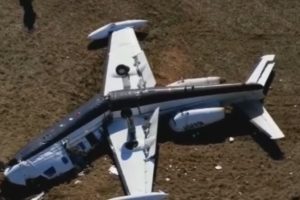 Two people are dead after a small plane IAI 1124 Westwind crashed near Oklahoma City. The aircraft was performing a flight from Panama City-Northwest Florida Beaches International Airport to Oklahoma City-Sundance Airpark with two people on board, but during landing impacted runway adjacent airport terrain and inverted, sustaining substantial damage.

At the scene of the accident were sent emergency teams. They found a man dead at the scene, while a woman was taken to a hospital in the area in critical condition. She later died from her injuries.

The Federal Aviation Administration is handling the investigation. They have not released information as to the cause of the crash.

Israel Aircraft Industries (IAI) Westwind (formerly Aero Commander 1121 Jet Commander) is a business jet that became a cornerstone of the Israeli aircraft manufacturing industry and remained in production for 20 years. Usually configured for seven passengers, it can carry as many as 10, or be quickly reconfigured as a fast air freight aircraft.