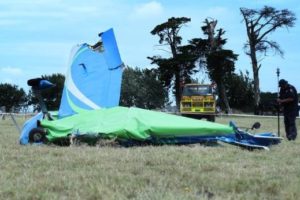 Light aircraft Van’s RV-7 crashed at paddock terrain at Te Kopuru in Kaipara District of Northland in New Zealand. The airplane suffered inflight mechanical problem and started losing heights, falling on the ground and causing fatal injuries to the two occupants onboard.

The emergency services were called to the scene shortly after 12.15 pm. The scene is being examined by the Serious Crash Unit and the crash will be referred to the Civil Aviation Authority and the Coroner.

The Van’s RV-7 and RV-7A are two-seat, single-engine, low-wing homebuilt airplanes sold in kit form by Van’s Aircraft. The RV-7 is the tail-wheel equipped version, while the RV-7A features a nose-wheel. The RV-7 is the replacement for the RV-6 and is externally similar to the earlier model, with longer wings, larger fuel tanks and a larger rudder to improve spin recovery characteristics.