Two people died after aircraft Yak-52 crashed in the Novoaltaysk area of ​​the Altai Territory in Russia. The accident happened next to the Chuysk tract highway at unknown circumstances. Unfortunately the both people on board died in the aviation accident. 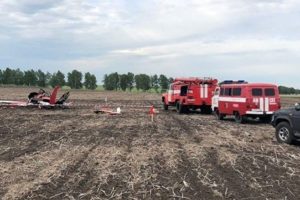 “The plane fell not far from the road, rescuers were leaving to extinguish the consecutive fire”, says the statement of the official authorities, adding that there is no destruction on earth.

In turn, a source familiar with the situation told the agency that the pilot and the passenger died during the crash.

The press service of the West Siberian Transport Prosecutor’s Office told that the aircraft belonged to a private owner.

“According to preliminary information, the private plane fell around 17:00 local time near the P-256 highway. Both pilots died at the accident. The transport prosecutor’s office of Barnaul organized an audit of the circumstances”, said the official statement. “The plane fell, either during take-off or landing. It is now being clarified”, adds the statement.

Investigative bodies of the West Siberian Investigation Department on the transport also began checking the accident. The investigation is underway and according to preliminary data, the plane fell near an airport near the village of Novy.


Yakovlev Yak-52 is a Soviet primary trainer aircraft which first flew in 1976. It was designed as an aerobatic trainer for students in the Soviet DOSAAF training organisation, which trained civilian sport pilots and military pilots. Currently the Yak-52 is used in the Federation Aeronautique Internationale (FAI) World Aerobatic Yak 52 Competition, a popular powered aircraft one-design World Aerobatic Championship.