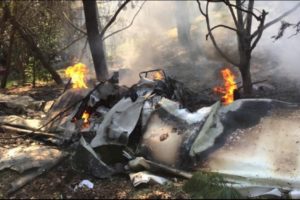 Training aircraft Cessna 150H crashed near Aerodromo Mexiquense Doctor Jorge Jimenez Cantu in Ciudad Lopez Mateos, Mexico. The accident occurred two kilometers from the runway under unknown circumstances. Following the crash, the aircraft was engulfed by fire and completely damaged. The two people on board died in the crash.

At the scene of the crash attended firefighters, medical teams and police officers. Unfortunately, they were unable to rescue the trainee and pilot on board of the aircraft.

So far the causes of the aviation accident are unknown and will be investigated by the Directorate General of Civil Aeronautics.

According to preliminary information, the aircraft lost the attitude and was about to fell on residences in the Emerald Zone, but the pilot avoided it and crashed into the trees near Aerodromo Mexiquense Doctor Jorge Jimenez Cantu, thus saving lives on the ground.

The Cessna 150 is a two-seat tricycle gear general aviation airplane that was designed for flight training, touring and personal use. The 1968 model 150 was designated the “H”. It introduced a new-style center console, designed to improve legroom. A new electric flap switch was also fitted that allowed “hands-off” retraction of the flaps, but not an extension.