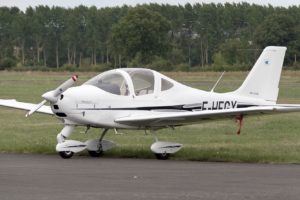 Two people died after training aircraft Tecnam P2002JF Sierra crashed in the town of Quijorna, northwest of Madrid, Spain. The tragic accident happened on a rural road near Calle del Real. The aircraft was performing a training flight with two people on board, but shortly after takeoff crashed on the ground, suffering serious damages and injuries the two people. Unfortunately, the trainee and the instructor died shortly after the crash.

At the scene of the accident were sent firefighting and rescue teams, who tried to help the people on board.

The Civil Guard is now investigating the causes of the accident. One of the hypotheses is that the plane has been able to collide previously with an ultralight aircraft, which was in the area and was able to land without problems. The investigation for this is underway.

The Tecnam P2002 Sierra is a two-seat, low-wing, light aircraft built by Tecnam, constructed from aluminum and powered by a single 100 hp (75 kW) Rotax 912 S2 engine. The aircraft features a sliding canopy which can be opened in flight.

In less than 24 hours there have been two aircraft accidents in the region after yesterday two men were seriously injured after landing the ultralight aircraft fell in San Agustín de Guadalix.