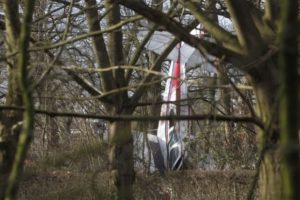 Two people died after light aircraft Beechcraft F33A Bonanza crashed into trees near Bredestraat in Belgium. The aircraft would have hit a high-voltage cable and crashed into the trees of Hasselt. The aircraft was en route from Wevelgem in West Flanders to Zwartberg airport in Genk for maintenance. The aircraft crashed, but was not followed by fire. Some local residents witnessed the fatal crash.

“I suddenly heard a great blow”, said Louis from Stokrooie, who witnessed the accident. “Then I saw the plane about 10 meters ahead of me, with the nose in the ground. I immediately drove backwards, because such a plane can explode. After I parked my car, I went back to look. Then I saw a person leaning forward, but he died”, added he.

The aircraft was recently bought by the pilot, who has amateur license. It was about to flight to Zwartberg airport during the weekend, but presumably due to the weather conditions the flight was postponed to Monday, when the accident happened.

The Beechcraft Bonanza is an American general aviation aircraft introduced in 1947 by Beech Aircraft Corporation of Wichita, Kansas. The six-seater, single-engined aircraft is still being produced by Beechcraft and has been in continuous production longer than any other airplane in history. More than 17,000 Bonanzas of all variants have been built, produced in both distinctive V-tail and conventional tail configurations.