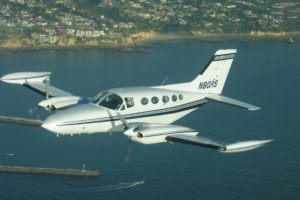 Two people died after small twin-engine airplane Cessna 421B crashed near Straz pod Ralskem in Czech Republic. The aircraft suffered engine failure and started spinning, falling on the ground after less than 10 seconds. Following the crash of the airplane it started burning. The accident was reported to local authorities by witnesses and at the scene arrive police officers and firefighters.

The burning debris of the aircraft were in an inaccessible terrain where it could not be reached by trucks or other equipment. They succeeded to extinguish the flames and found the bodies of the two people, but failed to understood their identity and judicial autopsy will be done.

The root cause of the accident is under way. According to witness evidences the twin-engine airplane Cessna 421B lost power and silently fell on the ground. After the fall it started to burn