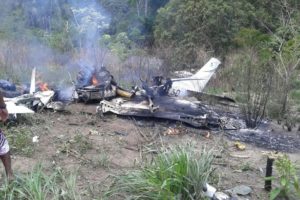 Two people died in Cessna U206G Stationair crash near Maunaloa west of Molokai Airport in Kaunakakai, Hawaii. The aircraft impacted brush terrain while inbound to the Molokai Airport under unknown circumstances. After the crash it was engulfed by fire, which burned almost the whole plane. The two people on board were fatally injured. Crews located the crash site in a remote area of Maunaloa Valley. Maui Fire Department attended to the accident immediately and extinguish the flames, but firefighters and police discovered two bodies at the crash site.

“They reported that they had lost communication with the aircraft”, said the chief of Maui Fire Department, Edward Taomoto. “We were able to locate the wreckage in a difficult to reach brush area, three to four miles west of the airport just east of the FAA navigational aid — the land-based radio beacon that pilots use to navigate between the islands”, added he.

Taomoto also said that the plane was too badly burned to identify, but crews were able to confirm that two people died at the scene.

The conditions included low clouds and fog that reached ground level. It was not raining at the time.

The Cessna 205, 206, and 207, known primarily as the Stationair are a family of single-engined, general aviation aircraft with fixed landing gear, used in commercial air service and also for personal use.