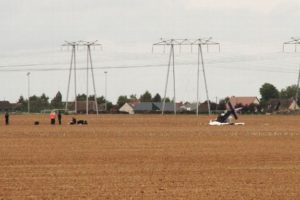 The ultralight aircraft ULM Eurostar crashed near the Dreux-Vernouillet aerodrome, killing two occupants on board. The airplane was approaching the runway at the airport, but due to unclear circumstances crashed in the field near it. Apparently, the craft was about to land, it was making a loop to get in the center of the runway when it crashed. Possibly the pilot lost control or was caught by strong wind gust during the maneuver.

The rescue teams arrived at the scene of the accident, but the two people in the aircraft were already dead.

Eurostar EV97 is an ultralight aircraft designed for sport/leisure flying, touring and training with limitation to non-aerobatic VFR operations. The Eurostar is aerodynamically controlled, single-engine, two-seat, low-wing, all metal plane with a fixed tricycle undercarriage and controllable nose wheel. The aircraft is equipped with four cylinder four stroke 80 HP Rotax 912 UL engine, optionally 100 HP Rotax 912 ULS or 80 HP Jabiru 2200. Excellent flight features, top quality and reliability, outstanding design and high performance – these are synonyms for Eurostar – one of the most popular ultralight aircraft today. Today already around 450 Eurostars are flying in more than 35 countries all around the world.