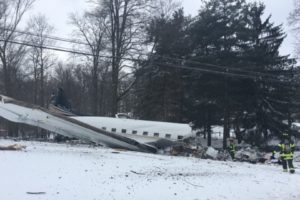 Two people died in aircraft Douglas DC-3-65TP crash near Kidron in Wayne County, Ohio. The airplane was performing a charter flight from Kidron-Stoltzfus Airfield en route to Akron/Canton Regional Airport with 6 people on board, but shortly after departure struck power lines, trees and impacted open field terrain under unknown circumstances to the southeast from the airfield. Unfortunately, the pilot and his assistant died in the plane crash, while the other four passengers were injured, but survived.

“When they were in-flight one of the engines went out on it and we believe that’s possibly what caused the crash today”, said Lt. Stephanie Norman from the Wooster Post of the Ohio State Highway Patrol.

Electric and phone lines were damaged in the crash.

The investigation for the root cause of the crash is underway.

FAA records show that the aircraft Douglas DC-3-65TP was built in 1942, but has been certified “airworthy” by the FAA in July 2018.