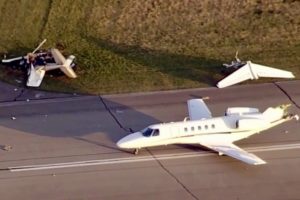 Two people died in airplanes crash at Marion airport. The two aircraft, a Cessna 150 and a Cessna 525 CitationJet, collided in Grant County at Marion Municipal Airport (KMZZ) in Marion, Indiana. The Cessna 150 partially burned by the post-impact fire and the two occupants onboard were fatally injured. The Cessna 525 CitationJet sustained substantial damage, but the five occupants onboard succeeded to escape from the wreck without injuries.

According to the preliminary information of the FAA, the Cessna 150 was attempting to take off, when it struck the tail of the Citation, which had just landed. The airport does not have an air traffic control tower, which might be the root cause of the accident. The pilots using the field are expected to announce their intentions on a common radio frequency and to coordinate with one another while on the ground and in the traffic pattern.

Officials say the Cessna 150 was carrying two people, who both died. They’ve been identified as 31-year-old Kyle M Hibst and 31-year-old David Wittkamper, both from Elwood.

The National Transportation Safety Board (NTSB) is handling the investigation for the accident.

The Cessna 150 is a two-seat tricycle gear general aviation airplane that was designed for flight training, touring and personal use. The Cessna 150 is the fifth most produced civilian plane ever.