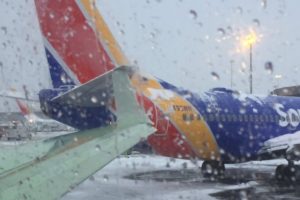 Southwest Airlines aircraft Boeing 737, which was taxing to take off en route to Fort Lauderdale, Florida, struck the right-hand horizontal stabilizer of a parked Boeing 737 of the same airline on the tarmac. Following the contact, both aircraft suffered slight damages, but the flights were cancelled. The passengers on board of the manoeuvring Boeing 737 were disembarked and transferred back to the terminal, forced to find a new flight to Fort Lauderdale. There were no injured people from the passengers on board.

“An aircraft bound for Fort Lauderdale, Florida was taxiing when its left wing grazed a parked plane that was getting ready to travel to Nashville”, says the official statement of Southwest Airlines.

The company said the planes will be out of service for inspections.

Investigation for the root cause of the accident is underway.